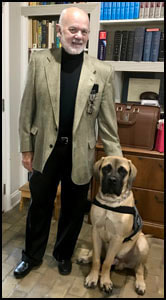 & service dog Shomer
​​​Dr. Isbell holds four university degrees and a Diploma in German literature, including a Ph.D. in Hebrew and Judaic Studies from Brandeis University (1973), where he studied ancient near eastern and biblical languages, literatures, and linguistics under Cyrus Gordon, Hebrew Bible with Nahum Sarna, and Cuneiform languages with Ernest R. Lacheman. He is an original member of the translation committee of the NASB (The New American Standard Bible).

​Both a Rabbi (1973) and a Cantor (1970), he has served various congregations in Kansas, Connecticut and Louisiana, most recently completing a seven-year term as Rabbi at Temple Sinai in Lake Charles, Louisiana.

Born in Marksville, Louisiana, Dr. Isbell grew up as a native speaker of Cajun French, graduating from Crowley (Louisiana) High School in 1962. Dr. Isbell’s taped interview (2018), housed in the T. Harry Williams Center for Oral History, preserves his dialect of Cajun French in the archive. Other modern languages he speaks and reads include Hebrew, continental French, Italian, German, and Yiddish.

Since beginning his academic career in 1972, at the University of Massachusetts, Dr. Isbell taught at two graduate theological seminaries before coming to Louisiana State University. Dr. Isbell has taught numerous languages (Hebrew, Greek, Latin, Arabic, Aramaic, and Akkadian cuneiform) as well as a broad range of courses in Bible (history, literature, and theology), rabbinic thought, and anti-Semitism.

At Louisiana State University since 1997 (Director of Jewish Studies from 2002-2007), he has taught graduate-level and under-graduate classes in the Department of Philosophy and Religious Studies. His most recent classes include the Old Testament, Religions of the World, the Holocaust, Hebrew Prophets, Religion and Politics, and Hebrew language.

Dr. Isbell enjoys teaching and academic advising and has served on numerous graduate examination and dissertation committees. In 2017, he was chosen as a Delta Zeta sorority “Favorite Professor” and was recognized by the Sigma Phi Epsilon fraternity for "Excellence in Teaching.”

LSU honored him at the “Innovation & Technology Commercialization” Showcase (2016) for his book, How Jews and Christians Interpret Their Sacred Texts: A Study in Transvaluation.

Complete lists of his published books and scholarly articles in the fields of Bible, Rabbinics, Languages [Hebrew, Aramaic, Greek, etc.] and Jewish Liturgy are available on site.

His professional memberships include the Association for Jewish Studies, Biblical Archaeology Society, Central Conference of American Rabbis, National Association of Hebrew Professors, and the Society of Biblical Literature.

Dr. Isbell has been a guest speaker at conferences, universities, synagogues, and churches throughout the USA and Canada, as well as in Israel. Recently, he was a guest lecturer at the United Presbyterian Church in Baton Rouge, presented a seminar at the LSU Graduate History Conference, and was a guest lecturer at the Undergraduate Society of Religion.

Having just retired from LSU, he will not be teaching there in Fall 2022 but is continuing his active schedule of speaking and research and will welcome invitations to be a guest speaker in the USA.